This Gates Super HC notched, banded power transmission V-belt reduces bending stress as the belt wraps around small diameter pulleys. It is made of EPDM (ethylene propylene diene monomer) rubber for resistance to weathering, oils, water, and some solvents. Its cords are bonded to the body are strongly bonded to the body of the belt for equal load distribution and reducing bending stress without deterioration of the cord. Notches molded into the underside create the flexibility needed to fit smaller diameter sheaves while maintaining strength and traction. A high-strength tie band permanently joins two or more belts to provide lateral rigidity, guiding the belt in a straight line and preventing it from coming off the drive. This PowerBand construction allows multiple belts to function as a single unit, with even load distribution and each strand fitting securely in the sheave groove. It has a working temperature range of -65 to +250 degrees F to protect the belt from cracking and meets RMA oil and heat resistance standards and static conductivity requirements. Super HC belts are part of Gates' V80 matching system, which guarantees that all belts of the same type and size will be more precisely matched than the Rubber Manufacturers Association (RMA) and International Standards Organization (ISO) standards require. The result is even load distribution on multi-belt drives and better wear. This V-belt is suitable for use with multiple V-belt drives exposed to pulsating or heavy shock loads that can make belts whip, turn over, or jump off the drive.

V-belts, also called fan belts in automotive applications, link two or more rotating shafts to transmit power in a drive system. The trapezoidal shape of the belt's cross section wedges into the groove of a similarly shaped sheave or pulley to provide traction and alignment. This wedging action increases as the load increases, providing higher torque transmission and minimal slippage. V-belts are standard for belt-driven power transmission and can be used in single- or multi-belt systems for increased carrying power. They are found in drive systems in the automotive, agricultural, textile, printing, mining, and office equipment industries, among others.

Gates manufactures power transmission and fluid transfer components and systems. The company, founded in 1917, is headquartered in Denver, CO. 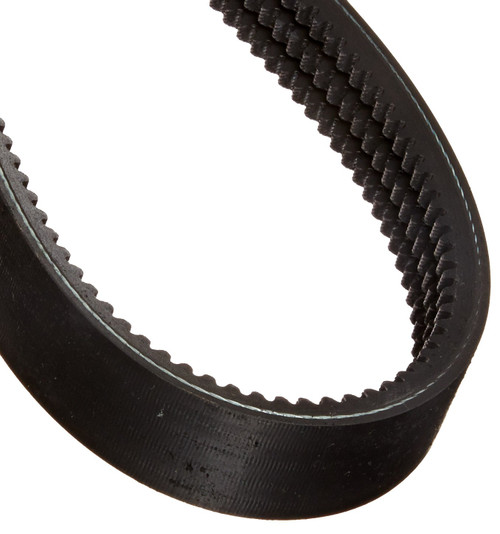